I kind of have to kick myself in the butt to get outside. Once I do though, I feel so good! Playing in the dirt, just plain makes me happy. I suppose it’s the perfect combination of sunshine, family time and an energy boost from Mother Nature. 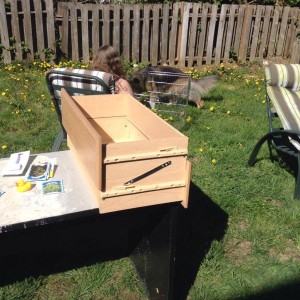 This winter we finally gave up and laid a cheap dresser to rest. Well, it fell apart AGAIN and enough was enough.

As the various pieces were being tossed into a dump pile, I got an idea. The drawers stacked 2 high might make pretty good garden boxes for the backyard.

Under the deck the dresser wreckage went. It was stacked on top of an old desk, counter, table thingy that I also planned on #repurposing. 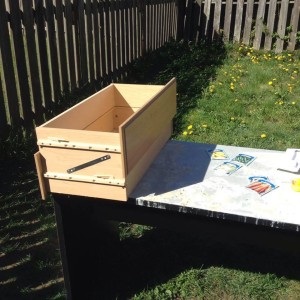 The previously enjoyed table was given to us in 2006. It’s seen many uses in its lifetime. In the decade that it’s been with us it has functioned as a retail display, used as a desk by a few of us and last acted as the foundation to Piggly Wiggly the guinea pig’s family home. Now it is going to help us grow food. #ReuseReuseReuse and then reuse some more!

Yesterday the weather was too perfect not to be outside. The sunshine was just right! So out in the backyard we went. Daughter kicking n’ screaming (maybe I’m exaggerating slightly but she was sulking), hubby grumbling and the dog so excited he couldn’t keep still.  Two minutes of sun and two improved moods later they were into it.

Who knew? That a backyard as tiny as ours could be so interesting to explore, felt like I was on a mini safari 😉 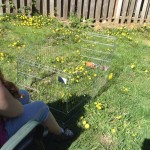 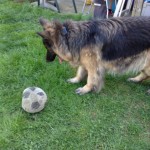 A family of garden snakes passed through on their way to the hot cement in front. The dog attempted to get the baby snakes to play ball with him (I kid you not). Our friend Robin the bird was hanging out in one corner. There is just so much life happening out there.

Never underestimate the healing power of nature, even in a tiny backyard. Besides at least this way, today I am hurting for a reason 😉

Thanks Russell Farms for the free dirt!