“When I was a kid, I used to spend hours playing in a little dirt patch in our backyard. I’d build cities with roads for my toy cars, rivers for boats, you name it. My kids do the same thing today. They just do it digitally, through Minecraft”. Excerpted from Danny’s Post Minecraft & Learning To Love The Digital Sandbox For Your Kids 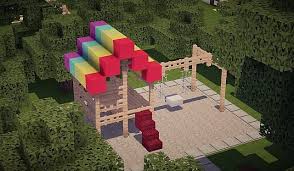 My response..Great way to look at it! My 13 year old is absolutely crazy about Minecraft. I admit that I have had my concerns. Now that I’ve read your post, I’m looking at it from a different perspective. She is creative and determined to succeed with each venture, building or project. She finishes the job, and then sets the bar higher for her next challenge. She has learned to plan ahead and face unforeseen obstacles. I like your “sandbox play” comparison and think that you’re bang on.

Recently the four of us were on a family outing. My husband and I attempting to cajole our two teen daughters into a conversation. One daughter was busy chuckling at something someone (who wasn’t in the car) just said, so we tried the other. The next attempt fell short as the 13 year old popped an earphone out, quite annoyed by the interruption.

I was thinking that teens today build social lives in a virtual world. They’re doing the same as we did, hanging out with a friend or friends. Just not in person. Often I’m cooking supper while talking to three or more kids, only two of which are actually in my kitchen.  Took some getting used to but these days I rarely jump when an invisible kid talks to me from what I thought was an empty room.

This is their life, these are their teens. These will be the stories that start with…”When I was a kid”…

I have decided I want to be a part of this time in their lives. So, I listen and I learn. When she shows me her latest Minecraft creation, I am proud of the effort she put into it. I ask questions, each time learning a little bit more.

When my eldest brings someone “virtually” for supper or to watch a movie I talk to them as if they are in the same room.

I’m ok (as long as they are careful) with them hanging out in a Minecraft or social media digital park just like I did in a grass, sand and dirt park all those years ago.